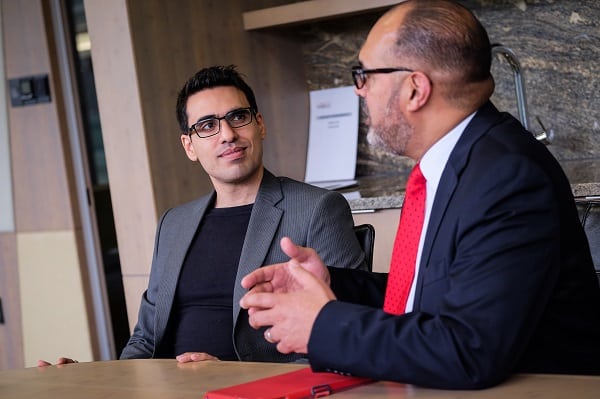 Published on 23 September 2015  By Chris Tredger

Imagine an economy defined by infinite resources and growth possibility. This is how cognitive neuroscientist Dr Idriss Aberkane describes the knowledge economy, saying it facilitates sustainable GDP growth based on an infinite resource in the form of knowledge. Africa, he says, has an opportunity to mine nature for knowledge as the most prized commodity.

This is just one of the messages the co-founder of neuroergonomic gaming company Scanderia and Senegal-based microcredit company Eirin International recently shared with local entrepreneurs.

Discussions centred around the knowledge economy, education, the blue economy and potential for disruption to change the way people perceive the world to be.

The young entrepreneur also said he would use the opportunity to emphasise that in any revolution there are three distinct phases: the first in which something is ridiculed, the second is when that ‘something’ becomes dangerous and then, finally, it becomes self-evident.

Asked if Africa was truly exploiting the advantage of being home to seven of the world’s ten fastest growing economies, Dr Aberkane said it is about using resources and innovation.

“I really believe there is a curse on natural resources,” he said. To illustrate Dr Aberkane says South Korea exports 20% (US$120bn) more than Russia per annum. Russia has a population three times the size of South Korea and 171 more territories, he added, with an abundance of natural resources and reserves.

South Korea has very little resources in proportion to Russia but, as Dr Aberkane explains, “when you have nothing, you are forced to innovate…you are forced to use this (knowledge) and this is more precious than gold.”

Dr Aberkane explained that Africa has an opportunity to utilise opportunities within the ‘blue economy’ and transform itself using natural resources and knowledge gained from the process.

“Nature has an MBA… most brilliant adaptation and we can learn from this,” he added.

Edward Kieswetter, chief executive officer at Alexander Forbes, said the intention behind hosting Dr Aberkane was to enrich local understanding and knowledge for the company, its staff, shareholders and the financial services ecosystem.