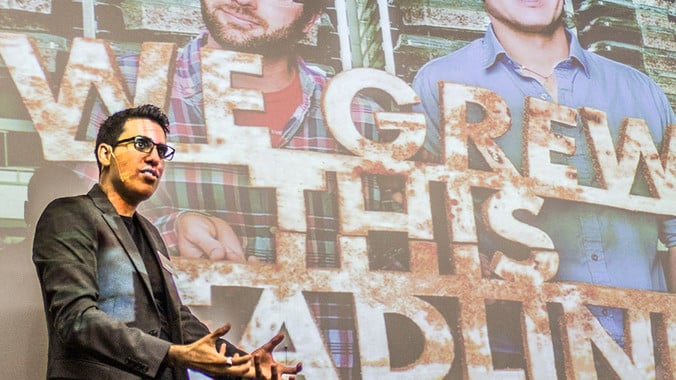 Technology will anoint the high priests of the new world religion of knowledge, it appears.

Dr Idriss Aberkane (29) is emphatic about many things.

“Natural research and development is just better than ours, period,” the French “neurogeek” told an audience in Sandton on Monday, explaining why mining nature for technological innovation is better than doing it in the lab.

And “man is greater than all his creations, period”, he said a little later, in holding that artificial intelligence is not a threat to humanity.

When he is not emphatic, Aberkane speaks in truisms: knowledge economies are good; human deaths are bad.

When neither maxim nor axiom will do, Aberkane rolls out the analogies. There are two ways you can make money out of people, he told a mixed group of insurance people and schoolchildren about employee management: you can either squeeze them or plant them. Squeeze them and you get a single glass of orange juice; plant them and you get an orchard.

Aberkane has many such pithy thoughts to share, all equally well packaged for easy consumption. Love is an extreme form of attention, and attention makes for faster learning. One person’s – or plant’s or process’s – waste is another person’s resource. Sharing information does not destroy it.

It is not so much what he has to say that is remarkable, though, but who is doing the listening.

Aberkane is a full-blown techno-utopian, wild-eyed in his belief in technological advancement and absolute in his conviction that it will all be for the good, eventually if not immediately. He is the kind of person, in other words, who not too long ago would have been laughed at by the establishment had he, in some unlikely fashion, made it through the door in the first place.

“I was just blown away by this guy,” said Edward Kieswetter, group chief executive of financial services giant Alexander Forbes, shortly before introducing Aberkane to his first ever audience in South Africa, but with two more such events scheduled, also sponsored by the company.

Alexander Forbes, Kieswetter intimated, realises that it is operating in “a time of exponential change” and, though it does not entirely understand the implications of that, it does understand it can no longer predict the future by extrapolations based on the past.

“Sounds like they’ve been scared into needing a new religion,” murmured an audience member in the back of the room.

And Idriss Aberkane, it turns out, can offer a theology perfect for any who have had their belief in strict capitalism shaken by global market upsets, or who have watched new technologies decimate old industries.

Aberkane is a French cognitive neuroscientist interested in everything from Sufism to the massive new headquarters Apple is building in California. His interest in computer gaming informs his views on harnessing attention; his interest in history tells him that progress comes from melting pots rather than homogenous societies.

To Kieswetter and his company, however, Aberkane’s value is not in his being a polymath or a neurogeek but in his designation as a “thinker” and a “disrupter” – and, unofficially, in the fact that his disruptive thinking is hugely positive, especially for a country such as South Africa.

For example, the flow of knowledge, Aberkane holds, is proportional to the product achieved when multiplying attention and time. The implications? In a knowledge economy everyone is born with purchasing power, and by virtue of not having jobs – and therefore having more time – the poor actually have greater purchasing power than those with money.

It does not take much encouragement for the financially minded to take that one step further: so, poor countries have the opportunity to leapfrog their richer counterparts in the shift to a knowledge economy. The only problem, of course, is the failure of South Africa’s education system. But technology – and love – can solve that, so the equation proves the future is bright, or so he maintains.

Aberkane combines such inter-linked examples into a proof for what he calls Renaissance 2.0, which, much like Thabo Mbeki’s African Renaissance of yore, requires the acceptance of a couple of fundamental truths to be given life.

In this case, it is the acceptance that “nature is a library” and that humanity should start reading the books rather than burning them as fuel.

The examples he cites of commercialised biomimicry are well known: the swimsuit based on shark skin, the car that draws its shape from a fish, the wound sealer made by mussels. But they are well known on the fringes; biomimicry tends to be the stuff of UFO conferences and small gatherings of environmentalists. Researchers and industrial designers love the idea, but rarely do financial services companies in the heart of the country’s economy stop to consider it.

The shift, the willingness to listen to those on the outskirts, may stem in part from the failure of the more traditional business guru. Those who base their spiel on the habits of successful people were not particularly useful when banks started collapsing around the world, and those who scenario-plan the political future failed to see the new pressure to nationalise coming from the Economic Freedom Fighters.

In such company Aberkane – with his message that all is in flux, but flux is good – stands out. He offers no hard answers to specific problems, but a great deal of hope.

And, like any good theology, Aberkane’s is self-defending and resistant to criticism.

There is only one really important idea he absolutely must share, Aberkane told his Sandton audience on Monday. Every revolution in human history, from female emancipation to the fall of apartheid, went through three stages. At first the idea seemed ridiculous. Then it seemed dangerous. Then it seemed, in hindsight, self-evident. Just jumping straight to step three would save everyone a lot of time and trouble, of course – but blinkered cynics have trouble doing so.

Not everyone will get it but that’s okay, he told an audience member after the speech. “Enough people will.”