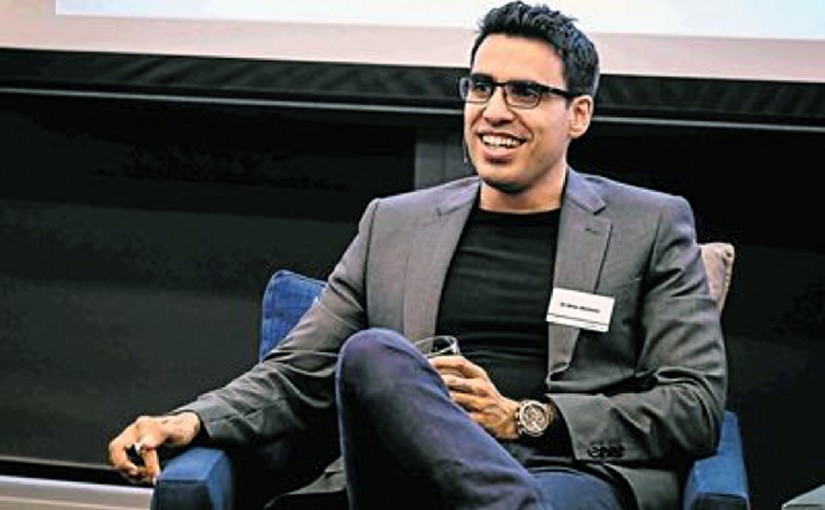 IMAGINE an economy with no waste and no unemployment, a market in which the supply meets every demand, and commodity exchange makes both parties happier and wealthier.

Academic and entrepreneur Idriss Aberkane argues that this is no fairytale, an economy like this exists and can be found all around us — in nature. Nature, he tells audiences around SA, is a library. Instead of reading its vast stores of knowledge, humanity is burning them. Despite his knack for a sobering metaphor, Aberkane is earnest and upbeat. The French scientist is in the country as a guest of Alexander Forbes, and we meet after he addressed 175 staff members and fellow young scientists as part of their Leading Conversations series.

His topic is biomimicry and innovation in the knowledge economy. Aberkane, 29, is an entrepreneur with three doctoral degrees — in Geopolitics, Applied Neuroergonomics (how neuroscience applies to ergonomics) and Comparative Literature. He is also the co-founder and CEO of neuroergonomic gaming company Scanderia, and cofounder and board member of Eirin International, an interest-free microcredit company based in Senegal.

The link between his diverse fields of study is a focus on knowledge itself: the geopolitics of knowledge, how neuroscience can change the knowledge economy and comparing western and eastern literature, “concluding that humanity is one big brain (left brain and right brain”.

“The unity of my fields of interest is my life. To me, knowledge is food, and the moment you realise that education is an all-you-can-eat knowledge buffet, you see it differently. I eat a lot. I like knowledge gastronomy; I like fusion cuisine,” he says.

Alexander Forbes group CE Edward Kieswetter was so inspired by Aberkane’s message after hearing it at a brief meeting in Paris, that he has engineered his visit to SA. Their mission: to introduce a little disruptive thinking to the financial services industry.

KIESWETTER pre-empts my next question by asking: “Why would Alexander Forbes, as a financial services firm, invite someone like this to address us? We want, in our small way, to have a positive impact on the world. The financial service sector hasn’t covered itself in glory in this regard, and I know we are all part of that.

“But how do we begin to transform an organisation? How do we transform the financial service sector in ways that are fundamental?”

His search for answers started with looking at disruptive technologies. “I was looking at what is happening in other industries,” Kieswetter says. “How do they reinvent themselves? I started talking to people who are deeply invested in letting what they call ‘massively transformed purposes’ guide them.”

That’s when Kieswetter encountered Aberkane, and his talk on biomimicry. This is an approach to the subject of innovation that looks to nature’s strategies to solve scientific, economic and social challenges — for example, engineers can draw on knowledge of a bird’s biology to improve how machines fly. Aberkane advocates that humanity, across territories, make a move to a knowledge-based economy. Unlike raw materials — he argues — knowledge is infinite. When it is shared, it is still retained by the initial owner and it grows exponentially. “For centuries, economists have believed that you cannot have growth that is not material. Silicon Valley and South Korea and other places have proved otherwise, and they have proved this in the most flamboyant and extravagant way,” he says.

SOUTH Korea is a leading manufacturer and exporter of electronics and digital media, two major products of the knowledge economy.

“Silicon Valley is another example. Apple has $200bn in cash, and their market cap is $750bn — more than twice the gross domestic product of SA. Apple was founded in a garage, with no raw materials at all.”

Purchasing a product of the knowledge economy aside, a pure knowledge transaction isn’t conducted in currency.

“Right now we are doing a knowledge transaction. I am giving you knowledge and you are giving me time and attention.” Aberkane calls a unit of this time an “AT” (time x attention). “If purchasing power is measured in ATs, then everybody has purchasing power. The unemployed have more purchasing power. That’s very good news.” His second teaching is that if nature is full of this knowledge (a kind of new oil), then biodiversity is an oil deposit. Humans have destroyed the library of nature, because we didn’t know how to profit from it, he says.

“Nature is a library; read it, don’t burn it. That is the motto of biomimicry. Go say that to the Brazilians. They had the Amazonian rainforest, but they burnt it. They burnt the most technologically advanced thing on the planet to plant soy, monocultures.

Biomimicry says if we read nature, we make money and we leave nature alone. When you realise that preserving the rainforest will give you more than burning it, then you protect it; and the new industries that will come from this will create jobs.”

LASTLY, but equally integral to Aberkane’s thesis, is the fact that in nature there is no waste. “If we produce like nature, it would be more profitable,” he says.

“The way that nature produces is extremely energy, and materially efficient. There is no comparison with what we do.

The most important message that Aberkane tries to convey is that this revolution in thinking — in how people approach business, industry and economies — will go through the same stages that all revolutions experience.

“Like women’s right to vote or the idea that the earth revolves around the sun: ridiculous, dangerous, self-evident.”